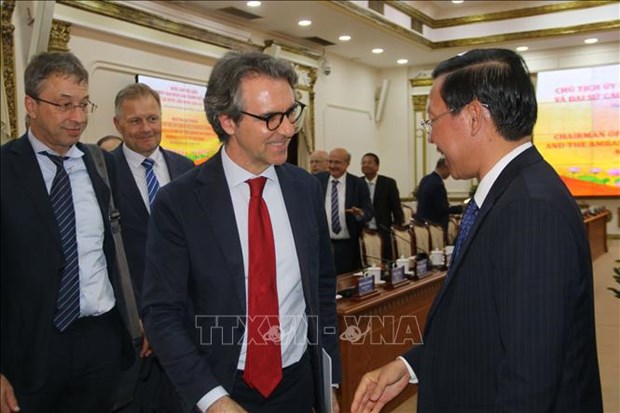 Mai stressed that HCM City is very interested in green transition and sustainable development. He reiterated Prime Minister Pham Minh Chinh’s strong commitments at the 26th United Nations Climate Change Conference of the Parties (COP26) in 2021, and said HCM City has identified the target of green and inclusive recovery.

The official briefed his guests on HCM City’s socio-economic
situation in 2022, and shared its experience in flexibly and safely
adapting to and effectively controlling the COVID-19 pandemic.

He said the city is actively joining major global trends like
opening, recovery, socio-economic development, green transition and digital
transformation, and is working hard to deliver on the country’s climate commitments,
especially one on net zero emissions by 2050.

Expressing his hope for stronger cooperation with
European partners in such fields as green transition, digital transformation,
climate change response, innovation and startup, Mai pledged to make all-out
efforts to ensure a stable environment as well as legitimate rights and
interests of investors and facilitate the stable, long-term, effective
operations of EU firms in the city.

Ambassador Giorgio Aliberti, head of the European
Union Delegation to Vietnam, lauded efforts by Vietnam in general and HCM City
in particular to overcome difficulties and maintain rapid, sustainable development.

He stressed that HCM City and the Mekong Delta at large
play an important role in cutting gas emissions, and promised to support the
city in rapid, sustainable development.

As of August 2022, 25 out of the 27 EU member
countries had invested in Vietnam with a total 2,384 projects and a combined capital of 27.6
billion USD, accounting for 6.42% of the total foreign investment in
the country, ranking fifth among 139 countries and territories investing in
Vietnam.

HCM City alone counted 1,141 projects from the EU worth some 7.94
billion USD, making up more than 10% of the FDI in the city, mainly in
processing, manufacturing, wholesale and retail, car and motorbike repairing,
and information-communications./.

Belgium a partner of leading importance in EU: PM | Politics

Previous Story
If Solana Didn’t Die, It Would Be The Second Largest Cryptocurrency. It Would Be Behind Bitcoin | by Paulo A. José | Dec, 2022
→

Next Story
8 Cryptocurrency Prices That Will Explode This Week